Liverpool Empire Theatre is located on the corner of Lime Street and London Road in Liverpool, Merseyside, England. The theatre is the second to be built on the site, and was opened in 1925. It has the largest two-tier auditorium in Britain and can seat 2,348 people. During its time it has hosted many types of entertainment, including variety shows, musicals, operas, pop concerts, and plays. The Beatles appeared in the theatre in their early days. The theatre has hosted twoRoyal Command Performances and, in 2007, a Royal Variety Performance to mark Liverpool’s being designated a European City of Culture the following year. It is sited in the William Brown Street Conservation Area.

The Empire Theatre continues to stage productions in various genres, including musicals, pop concerts, comedians, plays, opera, and wrestling. The theatre is reputed to be haunted by at least two ghosts, one a former painter at the theatre called Len, the other a girl aged about nine or ten in Victorian dress. As of 2011 the Empire is part of the Ambassador Theatre Group(ATG).

Don’t forget to pre-order your interval drinks when you arrive as all bars get busy! During most performances alcoholic drinks are allowed into the auditorium. We now accept all major credit and debit cards for bar bill payments.

Situated within the Theatre, Lime St Bistro serves simple food in a comfortable and stylish setting, making it the perfect venue to begin your evening at the theatre. With a delicious new dining menu and excellent pre-theatre offers, why not book today by calling 0151 702 7354 or emailing limestbistro@theambassadors.com. 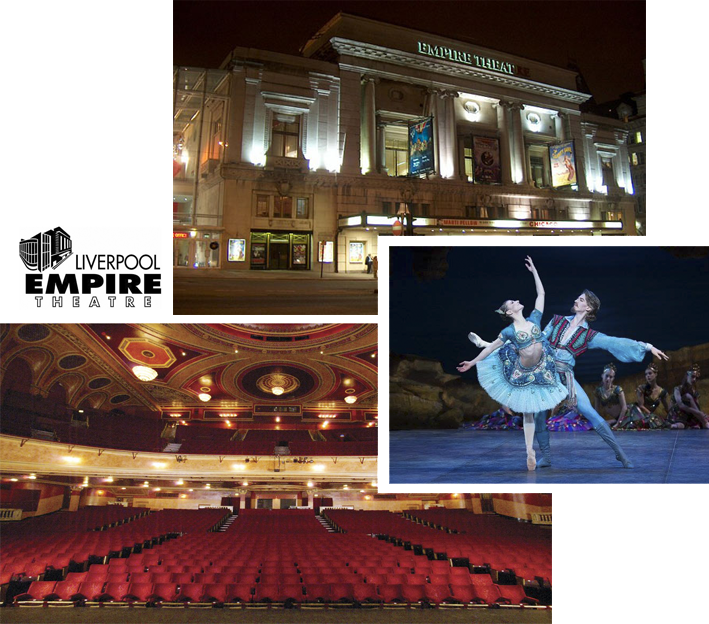